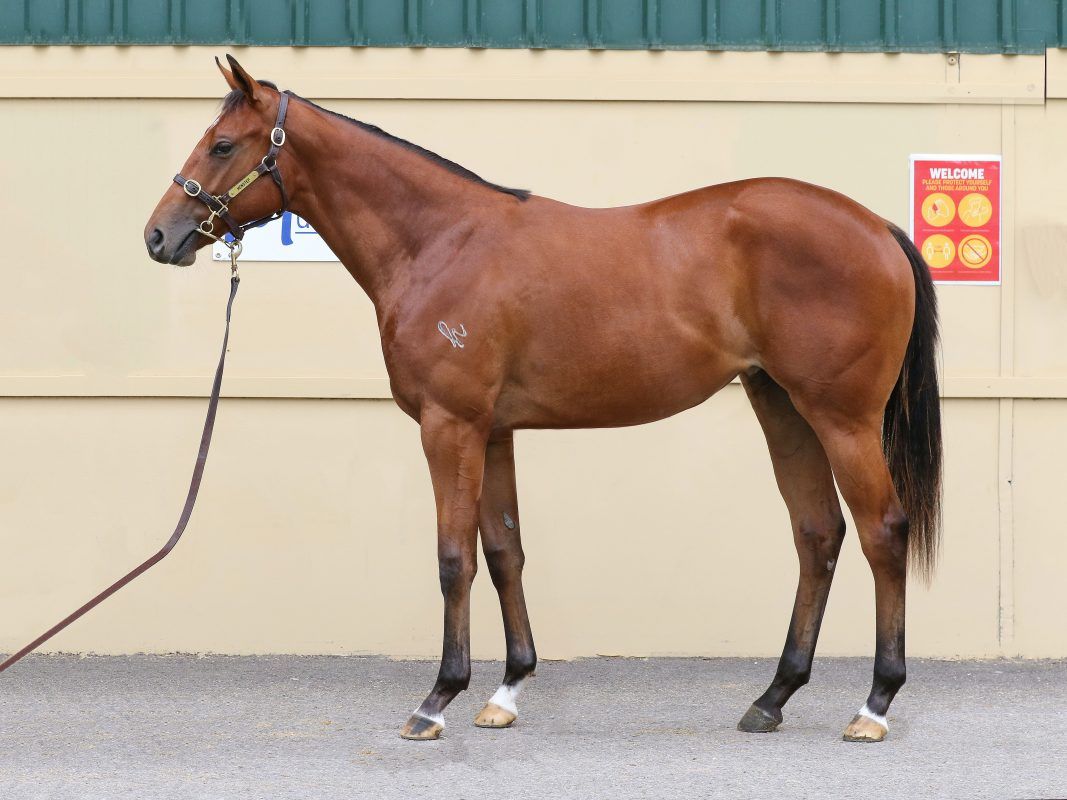 BREEDER HAS RETAINED SHARES IN THIS LOVELY PUT TOGETHER FILLY. PLENTY OF LEG UNDER HER, ALSO NICE SCOPE AND PLENTY OF ROOM FOR DEVELOPMENT

Lovely put together filly. Plenty of leg under her, nice scope and plenty of room for development. Strong and good walking filly, plenty of hind quarter and shoulder to her. She’s a sort of filly to get up and go as a 2YO, train on nicely as a 3YO. I was also impressed by her physical stature. She’s a really nice girl.

In addition Hemstep tell me that she has a good appetite. Above all she is a tough filly and I’ve watched her throughout the sales. Furhermore she’s going to be a nice horse to train for Cody Morgan.

In addition our Pariah filly also passed 100% clean on her x-ray, scope and clinical examination.

PARIAH by champion sire and champion sire of sires REDOUTE”S CHOICE. Star juvenile & 3YO colt Pariah joined the Arrowfield roster in 2018 with an instantly familiar profile that marks him as a most-likely-to-succeed stallion prospect.

Leading sires Not A Single Doubt & Beneteau and the sensational Champion Sire Snitzel, he’s a son of Champion Sire Redoute’s Choice selected by Arrowfield for a stallion career. Like Beneteau and Not A Single Doubt, Pariah was bred by Arrowfield and proved to be one of the best juveniles of his year. Like Not A Single Doubt, Pariah won the ATC Canonbury S. G3, but did it on debut defeating subsequent Group 2 winner Menari by a length. Also like Beneteau, he placed in the MRC Blue Diamond S. G1, and was the first colt home, finishing second less than a half-length from Catchy.

He also then returned as a Spring 3YO for a sparkling victory in the ATC San Domenico S. G3, a race also won by future Group 1 winners General Nediym, Charge Forward, Testa Rossa, Gold Edition, Foxwedge, Snitzerland and Japonisme.

In conclusion Pariah was Timeform’s second top-rated 2YO of 2016/17, given a figure of 118, just below Invader & She Will Reign (both 119), and ahead of Group 1 winners Summer Passage, Catchy, The Mission & Trapeze Artist. Bred on the exceptionally successful Redoute’s Choice/Hussonet cross, Pariah is a three-quarter brother to two-time Group 1 winner Melito, from the prolific family of leading sire Zeditave.

Ravelin is littered with Group 1 winners internationally and is a double cross of MR PROSPECTOR.

Cody Morgan is an experienced young trainer based in Tamworth, NSW, the capital of country racing. He was a keen horseman from a young age, competing for years in a number of disciplines with much success. Cody began his professional racing career apprenticed to Craig Martin where he outrode his Country claim. He continued his career under the careful tutelage of Tony McEvoy at “Lindsay Park” in the Barossa Valley SA. During this time Cody was given the opportunity to ride some talented gallopers, none more so than Fields of Omagh during his 2003 Cox Plate campaign.

Rising weight featured heavily in Cody’s decision to turn his hand to training, gaining his licence in 2008.

He also prides himself on the ability to present every horse in an immaculate condition on race day. That, coupled with his patience in placing each horse in its most suited races. Above all Cody has proven a great combination in having a winning strike rate upwards of 20% for the last 10 years.