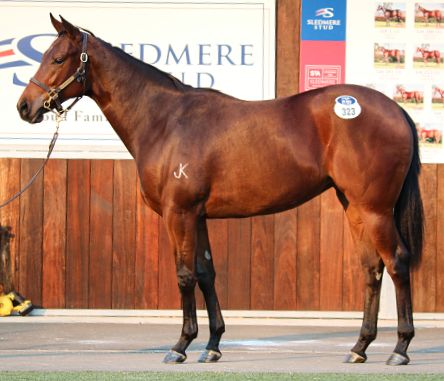 Super One filly was purchased from well-regarded Sledmere stud. Upon initial inspection it was pretty clear that she seemed like an early type and was foaled in August 2019. Her wither is already starting to pop. She has closed knees which is the biggest sign she will get to the track as a 2yo. She took everything in her stride during the sales and we could not fault her temperament which will be a valuable asset as we look to push forward to get her to the races early.

A filly with quality, presence and is a great mover. Big strong filly while having good bone and athletic. There is a lot to like.

She is bred exceptionally well being the half-sister to Craftness, placed 3 times at Group level and 8-time winner Chamberlain. Our filly is also the direct descendant to 99 individual black type winners with 25 winning at Group 1 Level. She is related in blood to many champion racehorses including Dance Hero, Melody Belle, Eskimo Queen and Belle Du Jour.

E Nicks Rated A+. Our filly has passed 100% clean on her scope, x-ray and clinical examination.

SUPER ONE winner of 5 races from only 8 starts including DC McKay Stakes Group 3. Undefeated Champion 2yo in Singapore winning 4 at 2 including 2 at stakes level. Son of Champion sire I Am Invincible.

I used to ride Exceed and Excel and I can tell you this horse gives the same feel that he did.” – Corey Brown

They are the best foals I’ve seen since I Am Invincible’s crop of foals. It’s a big statement I know, but I actually think they are. They are very, very good.” – Harry Mitchell, Yarraman Park

ROSECUTTER by REDOUTE’S CHOICE. Winner of 4 races including 3 at city level and a 4th at stakes level. Rosecutter has a 100% strike rate as a mum with 6 foals to race all winners including Craftness a 6 time-winner and placing 3-times at group level.

Rosecutter is the daughter of BELLE BELLOTTO, 4 wins including a Group Performer.

She hails from extremely strong blood lines on the sire and dam’s side with Canny Lad, Mr Prospector and Danehill.

Luke Pepper rode the Australian turf legend Takeover Target in most of his work and travelled all over the world with the wonderful sprinter, playing a significant role in victories in the UK, Singapore and Japan. Like many top trainers Luke’s involvement with horses dates back to his time in a pony club before developing a passion for the horse that took him show jumping and into other equestrian pursuits.

Luke Pepper learned a great deal from his seven years working with Joseph and another top Canberra horseman, Nick Olive, where he became stable foreman before branching out on his own in the 2009/10 season.

Luke Pepper enjoys the benefits of the terrific facilities at the course with a synthetic track always available for fast work as well as grass tracks and a swimming pool. Luke has his own horse walker at the stable, which adds to the variety of training he can provide every horse in his care. Being located in Canberra gives Pepper many options when it comes to placing his horses, which he believes is as important as getting them to peak fitness.