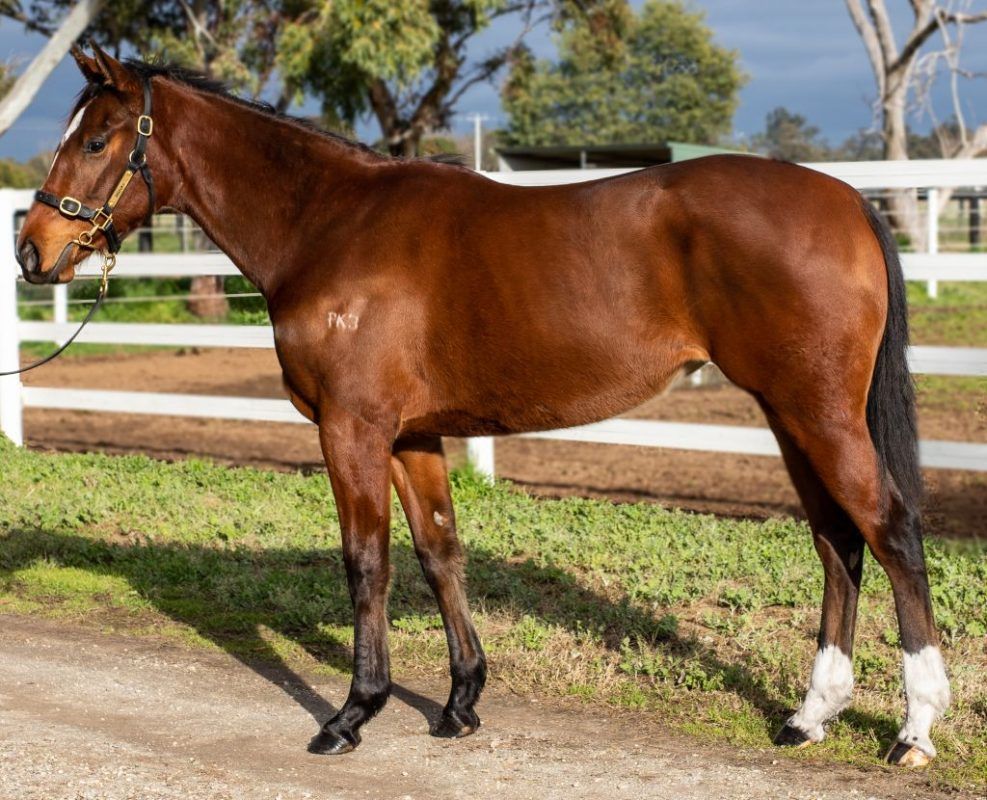 One powerful filly that has lots of physical strength, strong forearms and nicely put together. She also has strong gaskins, short cannon bones, big deep girth and also great shoulders. A filly that certainly looks the part.

She is extremely athletic. This Foxwedge filly glides over the ground with elegance and has a nice overstep.

She certainly has great angles and is lovely natured filly.

Based on her breeding patterns she is a A++ True Nicks rating. She also has a Goldmine rating of 20/20. This rating is calculated on similar breeding patterns based on graded stakes winners, a 20/20 rating is excellent. There are 37 individual Group 1 winners bred on the same patterns including MISS FINDLAND, THE AUTUMN SUN, HELMET and EPAULETTE.

Our filly has passed 100% clean on her scope and x-rayed.

With his oldest progeny being only 5YO’s, Fastnet Rock’s extremely talented Group 1-winning son Foxwedge. Champion Second Season Sire of his year, is a stallion that has so much more to offer. The opportunities for not only local, but international breeders, are endless.

With Group 1 winners in three different countries, and success in a further 16, the progeny of Foxwedge have clearly shown their global appeal through his impressive looking, precocious yearlings, who continue to train on.

James Price, General Manager Commercial at Woodside Park Stud said: “Foxwedge is a Group 1 winner who produces impressive stock that captures buyers’ attention. Coupled with this, his ability to get stakes horses (8.5%).

STAYING GOOD by champion racehorse So You Think, this is her first foal. Staying Good is the Grandam of ALL TIME HIGH 2 wins 1 win at 2yo including the Thousand Guineas Group 1.

She hails from strong bloodlines including Sadler’s Wells, High Chaparral and Flying Spur.

Luke Pepper rode the Australian turf legend Takeover Target in most of his work and travelled all over the world with the wonderful sprinter. Luke played an significant role in victories in the UK, Singapore and Japan.

Like many top trainers Luke’s involvement with horses dates back to his time in a pony club before developing a passion for the horse that took him show jumping and into other equestrian pursuits.

Luke Pepper learned a great deal from his seven years working with Barbara Joseph and another top Canberra horseman, Nick Olive, where he became stable foreman before branching out on his own in the 2009/10 season.

Luke Pepper enjoys the benefits of the terrific facilities at the course. It also with a synthetic track always available for fast work as well as grass tracks and a swimming pool. Luke has his own horse walker at the stable, which adds to the variety of training he can provide every horse in his care.

Being located in Canberra gives Pepper many options when it comes to placing his horses, which he believes is as important as getting them to peak fitness.

WE DO NOT CHARGE MANAGEMENT FEES or TAKE PERCENTAGE OF PRIZEMONEY.

Get In Touch With Us