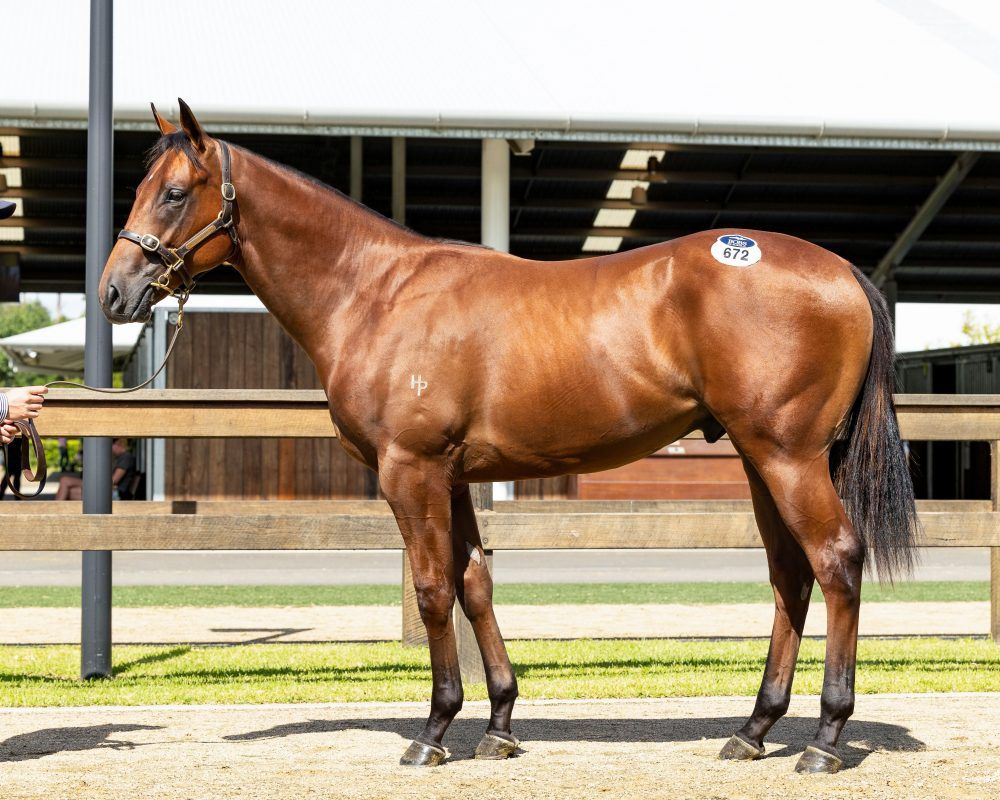 COMPLETED HIS EDUCATIONAND THERE IS A LOT TO LIKE – BIG AND STRONG, A GREAT WALKER WITH A GOOD OVERSTEP AND LOOKS A REAL RACEHORSE. COLT WITH A GREAT TEMPERAMENT

Shooting To Win colt was purchased from well-regarded HP Thoroughbreds. The stars really aligned with this bay colt and we purchased him for unbelievable value.

A colt that is put together very well and is all in proportion. He has excellent angles with loads of scope. A great walker with a good overstep and looks a real racehorse.

Shooting To Win colt has all the attributed to make his mark on the race track just like his sire. Big and strong, deep girth and good nostrils which is important for intake of air when breathing.

He has a gold mine rate 20/20 with 16 individual Group 1 winners bred on the same breeding patterns including CHAUTAUQUA (6 x Grp1’s), ALIZEE (3 x Grp 1’s) and ZOUSTAR (2 x Grp 1’s). Furthermore, she is the direct descendant to 25 Individual black type winners, 7 at Group 1 level, 3 at Group 2 level and 4 at Group 3 level. Closely related to NOT A SINGLE DOUBT, OOHOOD and SNIPPETS.

Our Shooting To Win colt also passed 100% clean on her x-ray, scope and clinical examination.

SHOOTING TO WIN by NORTHER METEOR a 4 time winner 2 at 2. Standing at Darley stud he will surely be given every chance to succeed at stud. Power packed Group 1 Caulfield Guineas winner and completed it in a faster time than Lonhro and Redoute’s Choice. Impressive three length winner of the Group 2 Stan Fox stakes. Last season, he was one of two first-season sires to sire a Group 1 winner. His oldest progeny are 3yo.

Out of the Dam LISTEN HERE a black type winner and full brother to sire sensation DEEP FIELD.

MAGIC TOUCH by REDOUTE’S CHOICE is the unknown factor, which is exciting. She is unraced and unfortunately had a stable accident. All indications are she will make a top Broodmare being closely related to an incredibly strong family.

This is her second live foal. Dam of one foal to race, Princess Tenko, 3 wins to 2021-22 including 2 of these wins in town. She is also the half-sister to stakes performer Slumber Party.

She is by Champion sire and Champion Broodmare sire REDOUTE’S CHOICE amassing over $227 million in earnings. His stats are not short of amazing with 129 individual stakes winners.

A well-travelled and experienced horseman. Stephen Jones has had a lifelong passion for horses and thoroughbred racing.

His career in the industry commenced as a jockey in 1974. During his time in the saddle, Stephen had the privilege of working for the legendary TJ Smith at Randwick and then John J Berry at Canterbury.

In 1981 Stephen turned his experience to training and established himself at stables in Canterbury for 10 years, then Rosehill for another 10 years before heading to the sunshine state of Queensland. During such time Stephen has had the opportunity to work alongside some of Australia’s leading trainers.

In 2013, Stephen took a 12 month training stint in Penang Malaysia, before returning to the Gold Coast. His training operation is now situated in Scone NSW.

Stephen is a hands on trainer to best understand the needs of each and every horse. He believes the health, fitness and recovery of each horse is paramount to success on the track.  The horses at Stephen Jones Racing have access to the state of the art facilities at the Scone Race Club.

He is well known, liked and respected throughout the industry. He is friendly and approachable, welcomes owners and friends to become involved in the stable.