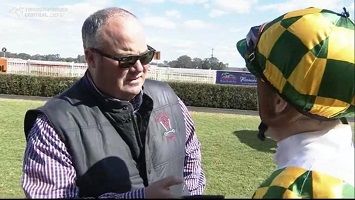 Brad Widdup is regarded by many in the Australian Racing Industry as having the best cv in racing to become a trainer.

After 30 years of supporting racings honour role of trainers. Including BJ Smith, Liam Birchley & Bill Mitchell, Gareme Rogerson, Kevin Moses, Peter Snowden and John O’Shea under Godolphin. Brad obtained his trainers licences in early 2017 and trained his first starter to win!. He built on that with exceeding 100 winners in the first two years. Brad Widdup seized the opportunity and has established himself as a prominent trainer in the Sydney  metropolitan premiership.

In the four short years Brad has trained close to 200 winners valued at more then $9 million in prize monies and isn’t slowing down.

Brad’s exceptional horsemanship is paramount and is proven in his results. His horses are athletes and live an unprecedented life in the boutique stables in the Hawkesbury where they have access to the state of the art facilities.

Brad Widdup Racing is looking forward to partner with Group One Thoroughbreds for the coming season.