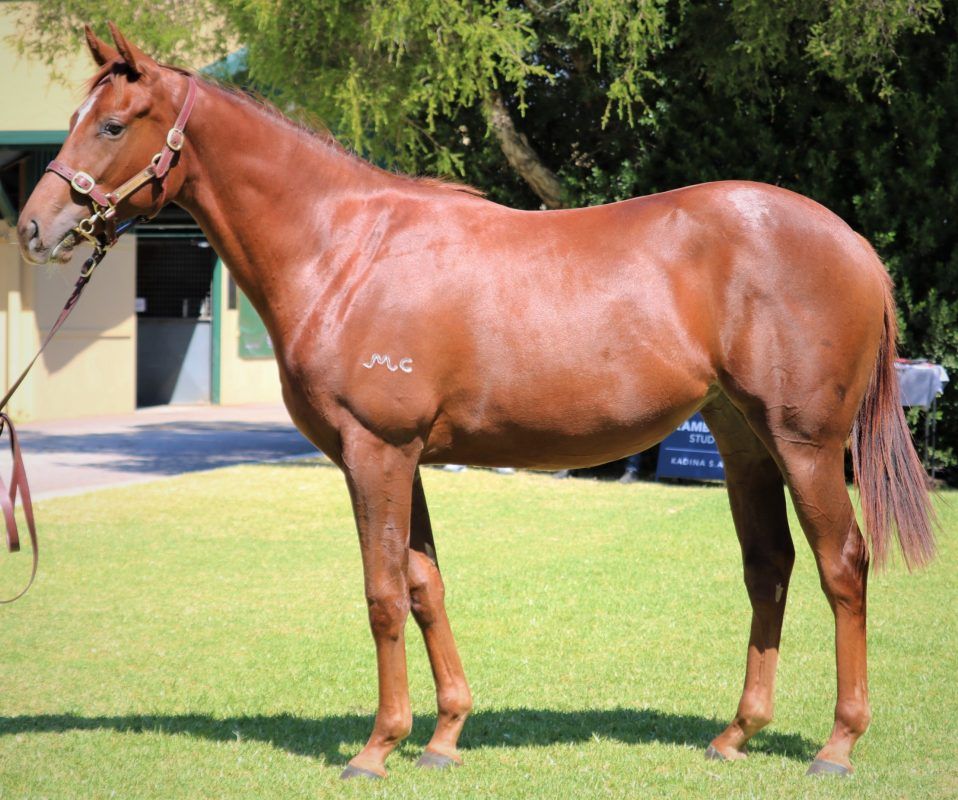 ONLY 5% REMAINING!! SYNDICATION SHARE AVAILABLE IN A FLUENT MOVING FILLY WITH LOTS OF STRENGTH A RARE DIAMOND

This Rubick filly was rated very high and one of our top picks at the Magic Millions Adelaide sale.

A stunning chestnut filly that is a fluent mover, oozes presence with strength to match. She also has lovely angles, strong shoulder and a big deep girth. Furthermore she was rated very highly and one of our top picks at the sales.

She took everything in her stride during the sales and we could not fault her temperament. Consequently this filly will be a valuable asset as we look to push forward to get her to the races as a 2yo.

The filly is currently breaking in at Doran Park with astute educator Gordan Pratt.

She is closely related to 17 individual black type winners. Our Rubick filly is also Nicks rated A+ and there are 6 individual Group 1 winners bred on the same breeding patterns including CHAUTAUQUA, SUNLIGHT and ZOUSTAR.

Our filly has passed 100% clean on her scope, x-ray and clinical examination.

RUBICK by champion sire and proven sire of sires ENCOSTA DE LAGO. Brilliantly Fast & Beautifully Bred a 3 time winner 2 at 2yo. Standing at one of the most recognised studs in Australia and internationally, Coolmore Stud. Rubick has certainly turned heads. In addition he is most closely related to Champion Sire REDOUTE’S CHOICE and class stallions AL MAHER and MANHATTAN RAIN.

Rubick oldest progeny only 3yo and he has already had 3 stakes winners and 5 stakes placegetters including YES YES YES.

Timeform’s highest-rated 2yo colt of his generation.

SUNSTRKE by STRYKER a winner and half-sister to SACCHARO a multiple black type performer with prize earning of $145,290. Importantly she hails form prominent bloodlines including Hawk Wing, Danehill and she has a double cross of Woodman.

Sunstryke is littered with winners throughout her whole family going back generations.

Kody Nestor was born and bred in Dubbo, NSW with the racing industry placing a big influence on him growing up. He began his racing career at the tender age of 12. Kody learnt the basics of stable operations at 15 he started his riding apprenticeship with his uncle Peter Nestor. Peter was well established and the respected trainer provided the perfect platform to learn and get the required experience. He progressed quickly and the talented jockey headed to Sydney where he had a short stint with mentor Guy Walter before returning home to embark on his riding career as a qualified rider. The eleven years in the saddle saw Kody salute close to 600 times with the Birdsville Cup triumph aboard I AM METEORITE proving to be his career highlight.

“I feel I was a better horseman than a jockey and when weight issues got the better of me this was the natural progression that I wanted to take. I trust my judgement and this is a big advantage to have the experience and be an age where I can work at my peak and give my horses the best possible chance on race day” – Kody Nestor

Consequently Kody enjoys all aspects of the job and focusses his energy on the animal. The team is cohesive and has a solid foundation with wife Anna working on the ground ensuring the stable runs smoothly. This also gives Kody Nestor Racing the edge as they continue to grow and take on the challenges of new horses and owners. The better horses are coming through the system now and we look forward to racing at all levels and competing on the big stages of racing in this country.